2020 was a year that changed our world in many ways with the global pandemic. Here in the United States of America, it also marked the year of record-breaking natural disasters that swept across the nation and one of the biggest political warfare in history.

This election year was one for the records, there were approximately 240 million Americans that were eligible to vote in this election and about 161 million did. That marks almost a 67% turnout rate making it the third highest turnout in our nation’s history since 1876. [1] With every election year, voters get the opportunity to voice their opinions in government for more than just the president. Five states had on their ballots this year, different measures to legalize cannabis either medical, recreationally, or both. 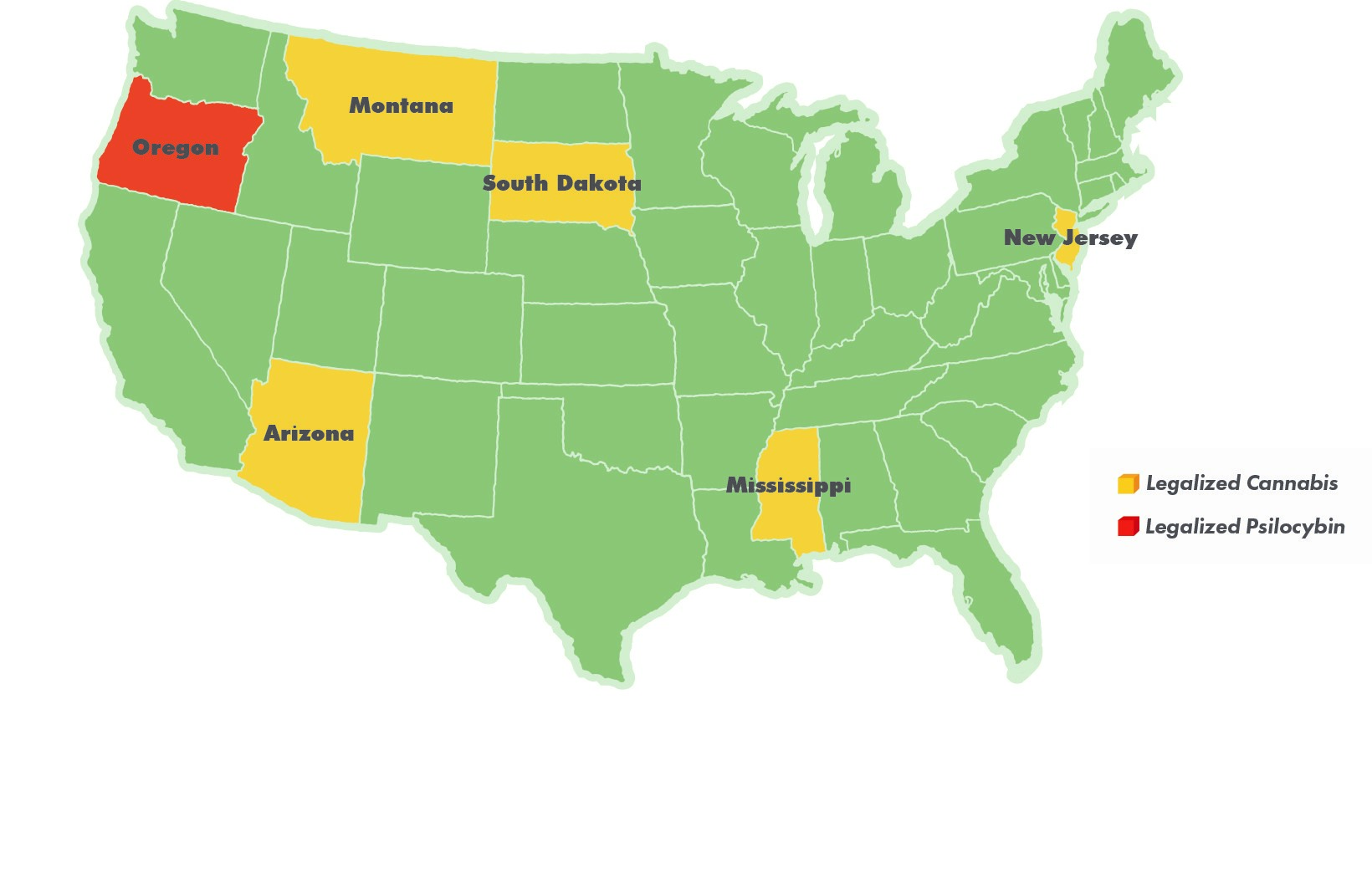 Question 1 on New Jersey’s 2020 ballot was an amendment of the state’s current constitution that legalizes marijuana recreationally for individuals age twenty-one (21) or older. Not only for consumption purposes, but for cultivation, processing, and sales as well. The new amendment will go into effect beginning January 1, 2021 which will include a 6.625% state sales tax as well as a possible additional local tax of 2% on all recreation marijuana sales. There currently are no specific information such as possession limits, growing rules, or retail regulations.[2]

“This amendment would legalize a controlled form of marijuana called “cannabis” Only persons at least 21 years of age could use cannabis products legally. The Cannabis Regulatory Commission would oversee the new adult cannabis market. This commission was created in 2019 to oversee the State’s medical cannabis program. The scope of the commission’s new authority would be detailed in laws enacted by the Legislature. All retail sales of cannabis products in the new adult cannabis market would be subject to the Sate’s sales tax. If authorized by Legislature, a municipality may pass a local ordinance to charge a local tax on cannabis products.[2]

Proposition 207 legalizes the possession and usage of marijuana for adults age twenty-one (21) or older in Arizona. Arizona Department of Health Services (DHS) will be adopting rules to regulate marijuana licensing as well as cultivation and production facilities. This proposition places a large 16% tax on marijuana sales on top of the current transaction and usage tax. Tax revenue will be used for emergency services, highway user revenue, and a new justice reinvestment fund. Additionally, anyone convicted of certain cannabis related crimes related to possession, consumption, cultivation, or transportation will be able to petition for expungement of their record beginning July 12, 2021.[3]

CI-118 is an amendment to the current Montana Constitution allowing the state to regulate the minimum age for marijuana purchasing, consumption and possession. Previous to the election, purchasing, consuming, or possessing marijuana was illegal in the state for recreational use. The passing of this would set the minimum legal age to be adults twenty-one (21) years of age or older.[4]

I-190 is about setting regulations in place for the consumption of marijuana in the state of Montana. This initiative will allow the state’s Department of Revenue to license and regulate the cultivation, transportation, and sale of marijuana and marijuana-infused products. It will require licensed labs to test marijuana product for potency levels and contamination. A 20% tax will be established on recreational products estimated to generate $48 million annually by 2025. It will create opportunity for individuals serving a low-level marijuana sentence to apply for resentencing or expungement of record. Additionally, there will be strict regulations for packaging and labeling to prevent accidental ingestion or access by children.[4]

Measure 26 proposes a medical marijuana program in South Dakota for individuals who have debilitating medical condition that is certified by a physician. Qualifying patients under this measure will be allowed to possess up to three ounces of marijuana set by the Department of Health. Additionally, register patients can grow three plants or as prescribed by physician at home.[5]

Initiative 65 is an amendment to the current Mississippi Constitution and would allow qualifying patients with specific medical conditions to use medical marijuana. It would allow medical marijuana to be provide only by a licensed treatment center. The state’s Department of Health would regulate and enforce the provisions of the amendment.

Alternative 65A is an alternative to Initiative 65 and all product will need to be produced by state-licensed manufacturers at pharmaceutical grade. Additionally, marijuana will be limited to those with terminally ill medical conditions as certified by a healthcare professional. Treatments will be overseen by license individuals and would have registry of enrolled patients for tracking and assessment of treatment outcome.[6]

Initiative 65 vs. Alternative 65A:

Measure 109 is a Psilocybin Mushroom Services Program Initiative that if passed would authorize the Oregon Health Authority (OHA) to create a program permitting licensing services to administer psilocybin-producing mushrooms or fungi to individuals 21 years of age or older. OHA would have two years to create a program that would determine license facilitators, qualification, education, trainings, exams dosage standards, labeling, and packaging rules.[7] 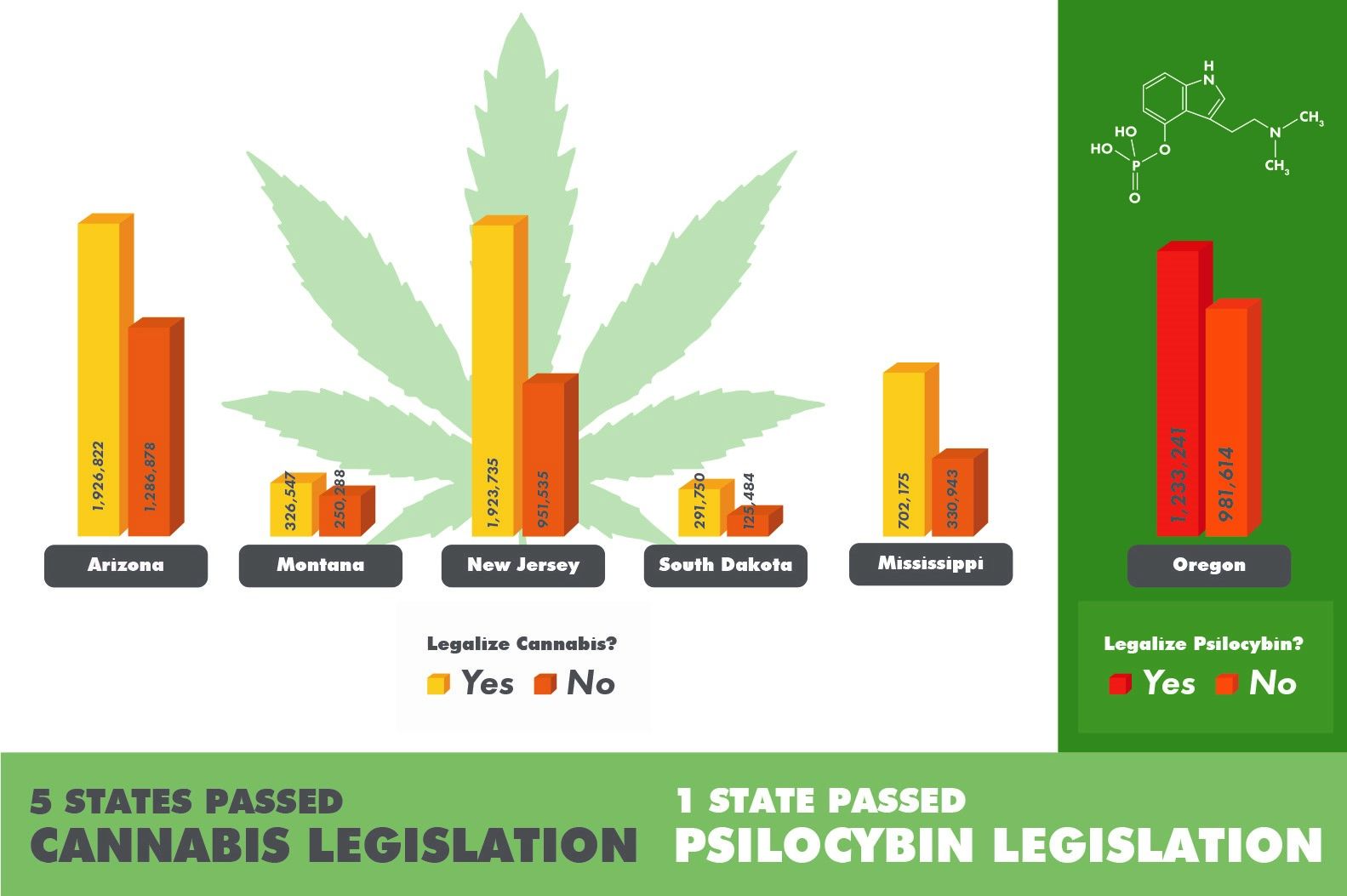 You must be over 21 years of age or older to enter this site.